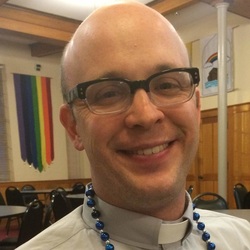 How Jesus Saves the World from Us: 12 Antidotes to Toxic Christianity
Wednesday, June 21 @ 7 pm
Calvary Chapel

Join us for a special evening with Morgan Guyton, who will be discussing his new book, ﻿How Jesus Saves the World from Us: 12 Antidotes to Toxic Christianity﻿.

This is a book for Christians troubled by what we’ve become and who want Jesus to save us from the toxic behaviors and attitudes we’ve embraced. As Morgan writes in his conclusion, "Christianity has always been about getting saved. But today what we need saving from most is the toxic understanding of salvation we’ve received through bad theology, corrupted by our worldly ideologies of empire."

One reviewer writes, "In all his work, Guyton seeks to redemptively reinterpret established Christian doctrines in the way he believes they were intended to be applied: for cultivating mercy, not practicing moralistic sacrifice. Guyton’s writing is marked by a self-deprecating hyper-honest assessment of his own egotism and a bald dependence on God to bring salvation. Morgan claims to write for the 'Dones,' those who have been severely disillusioned with the church in an era of its visible hypocrisy, and he does so with a generous pastoral and theological sensibility fully rooted in his experiences as a Methodist and an evangelical."

Morgan is co-director of NOLA Wesley Foundation, a United Methodist campus ministry at Tulane and Loyola Universities in New Orleans. He has a blog at Patheos.com (Mercy Not Sacrifice), and has contributed articles to the Huffington Post, Red Letter Christians, Ministry Matters, Think Christian and The United Methodist Report.